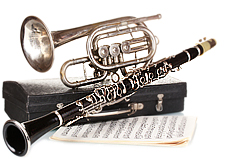 As a young musician, Otto M. Schwarz actually wanted nothing more to do with wind music: he was busy with pop music and with his studies at the Vienna Academy of Music. The music seemed too conservative to him, and saw no future for himself in this genre. However, when he was given the task of directing an orchestra, he had to start getting to grips with appropriate material. So it was that he began familiarising himself with some of the symphonic compositions of those who are now his colleagues, which inspired him. He set out to win over young people to this music and at the same time to confront the traditional brass band establishment and so, in 1995, he began to compose in this genre. There’s a story behind most of his pieces, which he tells us in his own language. If you browse the tracks in the playlists, you’ll come across these stories together with audio examples and information on sheet music.